Mallam Abba Kyari, President Muhammadu Buhari’s chief of staff is dead.
He died of COVID-19 on Friday. He was in his early 70s.
The Presidency confirmed his death in a statement early Saturday.
Media adviser, Femi Adesina made the obituary announcement.
“The Presidency regrets to announce the passage of the Chief of Staff to the President, Mallam Abba Kyari”, he said.
President Buhari and Abba Kyari
“The deceased had tested positive to the ravaging COVID-19, and had been receiving treatment. But he died on Friday, April 17, 2020.
“May God accept his soul.Funeral arrangements will be announced shortly”, Adesina added.
Kyari’s underlying medical conditions was believed to have complicated his battle with the disease. And thus caused his death.
He showed the symptoms of the disease after he returned from a trip to Germany last month.
His positive testing almost shut down the business of government.
Both the Federal Executive Council and National Council of State Meetings were postponed indefinitely.
It also led to a flurry of tests by people who had been in contact with him.
Among these were President Buhari, VP Yemi Osinbajo and Secretary to government, Boss Mustapha.
Governors also took the COVID-19 tests.
Kyari later came out in the open to declare he had COVID-19. He was then hospitalised in a private hospital in Lagos. The presidency did not indicate where he was treated.
But some reports said he was hospitalised at First Cardiology Consultant (FCC), a private health facility located at Thompson Avenue in Ikoyi.
Abba Kyari is survived by four children. 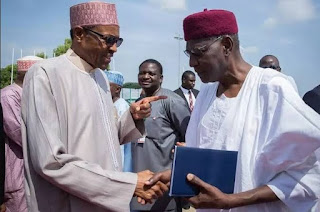 0
Previous post Offset’s baby mama shares chats where he asks for sex from her despite being married to Cardi B
Next post Abba Kyari’s Burial: Hypocrisy Of Nigeria’s Government And Elites as NCDC Reminds Nigerians To Stay Away From Mass Gatherings
Admin