Admin
Facebook
Twitter
Pinterest
LinkedIn
Read Time:4 Minute, 29 Second
Nigerian Government Spent Millions Of Naira In Trying To Save Life Of Abba Kyari, Who Died Of Coronavirus.
Against the notion presented to the public that the now late Chief of Staff to President Muhammadu Buhari, Abba Kyari, deployed personal funds in seeking a viable treatment for his Coronavirus infection, SaharaReporters can confirm that the Presidency actually made huge sums from the public treasury available in trying to save his life. ‘
Kyari died on Friday , exactly 26 days after SaharaReporters first broke the news of him being severely ill and in fact suspected of contracting the deadly virus after trips to Germany and Egypt where the pandemic had claimed hundreds of lives.
Upon his return to Nigeria from those countries, it was reliably gathered that Kyari, who had a history of diabetes and was in his 70s until his death on Friday, refused to observe the mandatory 14-day self-isolation period, instead going about his normal activities and subjecting dozens of persons including ministers, state governors and Aso Villa staff to the risk of contracting the virus.
Three of his staff were shortly afterwards
confirmed to have contracted the virus while some state governors, who had contact with him were also infected.
After being denied the usage of the Presidential Intensive Care Unit at Aso Villa, Abuja, which was kept for the use of President Buhari in case there was an emergency around him, and considering the Gwagwalada Specialist Hospital isolation unit too low for his standard and or liking, Lagos was considered the best place to find cure for Kyari.
In the face of a global lockdown and with many countries with functional health systems closing their borders to international visitors, the Lagos Infectious Diseases Centre was one of the few places that could successfully deal with his case especially after it treated an Italian man, who first brought the virus into the country at the time, with great success.
But rather than check into the facility of the Lagos State Government, Kyari violated the Quarantine Act to embark on a private treatment for his Coronavirus infection against the directive and recommendation of senior government and Ministry of Health officials.
According to a senior government official, his move to Lagos and choice of a private treatment facility cost the Nigerian Government huge sums in public funds especially in taking care of the upkeep and general welfare of the large number of security guards, medical staff and other categories of care givers that were always on the ground to ensure everything around him was fine.
This was aside the amount spent on their accommodation and providing relevant safety items to ensure all persons looking after the late Chief of Staff to President Buhari were not infected with the virus.
The private facility where he received care until his death also received ‘special attention’ from the Presidency, which ensured that all needed items for his recovery were in place.
All these, according to the official, ran into several millions of naira — the exact amount which could not be confirmed at the time of this report.
“Forget what they are saying in top government circles, the Presidency actually spent big in trying to save Kyari’s life. They spent some good millions of naira in attempting to save his life.
“He is one of the persons President Buhari trusts the most in this world and he was willing to do anything to save Kyari’s life.
“Throughout his stay in Lagos, the Presidency ensured that he got all the support he needed to defeat the virus by ensuring that funds were made available to foot any type of cost around his treatment and also ensure the safety and welfare of all those looking after him.
“As a prominent member of the cabal, there is no way the President or anyone in that circle was going to watch him spend personal funds to get a viable treatment for his situation. All needed support came from government,” the official, said.
Until his death, Kyari was one of the most influential and powerful figures in President Buhari’s government.
Governors, ministers and other important personalities all had to first win him over before gaining access to the President.
“There is nothing happening around President Buhari that he was not involved in.
“He was a pillar of support to Buhari in too many ways. Both of them had come a long way.
“His death is a huge personal loss to Buhari, he is going to feel his absence a lot,” the official said.
SaharaReporters also reliably gathered that the Nigerian Government made attempts to fly the late Kyari to London, United Kingdom, for treatment but had to shelve that idea especially after Coronavirus deaths rose astronomically in that space.
The UK has 14,576 deaths from 108,692 confirmed cases of the virus at the moment.
Kyari, like Buhari, had jetted out to the UK in the not too distant past to seek treatment for his health.
The doctors in the UK understand his medical history and know how to handle his case but the situation in Britain had prevented him from being flown there for attention.
Buhari on his part has a yet to be disclosed medical ailment and in fact spent five months in London in 2017 for treatment.
He has visited the UK several times more since that period for treatment. 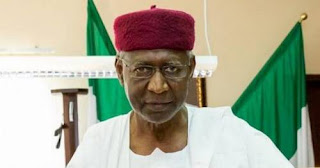