Lockdown: Man arrested for attempting to smuggle his girlfriend in his car booth (photo)

A man has been arrested by the police for trying to smuggle his girlfriend in the back of his car amidst a nationwide lockdown to curb the spread of COVID19 in South Africa. 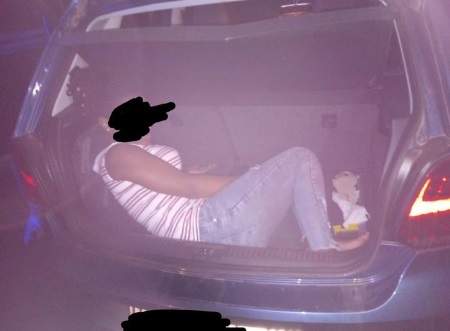 South Africa government imposed a nationwide lockdown on March 24th for three weeks but the lockdown has been extended until the end of April.
According to an official from the province of Gauteng, said the woman was found in the car booth during a stop and search at a roadblock in the province.
The driver who did not have a permit, was headed to the Eastern Mpumalanga province. Authorities say the woman was also arrested for consenting to be smuggled