Donald Trump has announced that the US government is freezing new green cards for two months, another strict immigration move he said is necessary to “take care of” American workers amid the
coronavirus outbreak.
Mr Trump said during his nightly press conference that he feels it “would be wrong and unjust for Americans laid off because of the virus to be replaced” by foreign workers. “We must first take care of the American worker,” he said, echoing the “ America first “ theme of his 2016 campaign and term in office.
“Right now, we have to have jobs for Americans,” he told reporters. “We’ve closed down the largest economy in the history of the world.
“They have to work. They need to support their families … People need money … We cannot break our country,” he said, contending Americans “want to get back to work” – even though polls out each week show a clear majority of Americans are more concerned with the virus spreading further than getting back to work. Tens of millions of Americans have filed for unemployment benefits since the country went into a near-lockdown last month.
But when one of his coronavirus task force members, Deborah Birx, was asked how hair salons, nail salons and tattoo shops could open up again safely, because those services do not lend themselves to social distancing, she seemed flummoxed.
“If there’s a way that people can social distance and do those things, then they can do those things, I don’t know how, but people are very creative,” she said.
Meantime, on the coming immigration order, the president said his move would apply to those seeking green cards; those trying to enter the US temporarily would not be included. Mr Trump said he intends to make the move official on Wednesday, a move that will stop much of the flow of immigrants into the United States. Saying he would review the potential need to extend the freeze in two months, Mr Trump said he would make that decision based on the “economic conditions at that time”, not mentioning the state of the virus.
Mr Trump initially signalled in a late-night tweet on Monday he was planning to shutter the entire US immigration system, but opted against keeping out temporary visitors. He signalled some waivers for “humanitarian” reasons, but offered few other specifics on Tuesday. 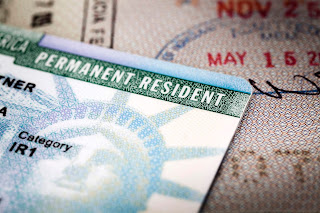