A 21-year-old man was paraded round a community in one of the South-East states after allegedly poisoning his twin brother for money ritual. 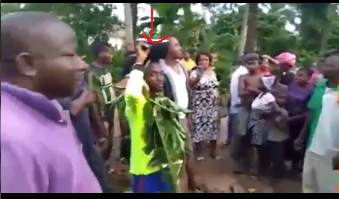 He was however nabbed after his twin brother noticed that the stew had changed colour. The suspect reportedly confessed to poisoning his brother’s food for quick money, because he is tired of of suffering.
The suspect who was seen carrying the pot of food on his head in the video, was forced to drink palm oil after eating a poisoned meat from the food
Watch the video;
Video Player