Nigeria, on Thursday, recorded its highest daily figure since its first
COVID-19 case in February as 381 cases were reported by the Nigeria Centre for Disease Control (NCDC) .
With the latest update, the total tally of infected people in the country rose to 3,526 from 3,145 reported on Wednesday evening.
The public health agency in a tweet Thursday night said the new cases were reported in 18 states. These are Lagos, Kano, Jigawa, Zamfara, Bauchi, Katsina. Borno, Kwara, Kaduna, Gombe, Ogun, Sokoto, Oyo,, Rivers, Niger, Akwa Ibom, Enugu and Plateau states.
All the reporting states already had at least a case of the virus.
As of the time of reporting, 34 states and the FCT have recorded at least a case of the disease.
There was an increase in the number of infections reported for Thursday compared to 195 reported on Wednesday.
NCDC said on May 7, 381 new confirmed cases and 4 deaths were recorded in Nigeria. 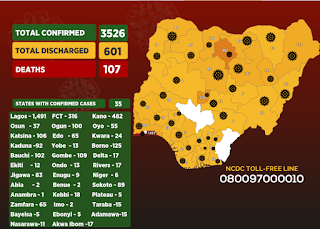 0
Previous post Just in: 25 Passengers On Flight From Kano To Lebanon Test Positive For COVID-19
Next post Gospel: Jerry Arabian ft OD4 – If No Be God (Audio+Video)
Admin