Man who boast of beating up his wife on Facebook, has been arrested

Lagos State Police has arrested a man who went to Facebook to share photos of his wife’s battered face, bragging about how he delt with her.
Recall we brought you reports about how a man identified as Afobaje shared the photos of his wife’s bleeding face on Facebook, then bragged about how he was waiting for police to arrest him.
In a update which was shared this morning, May 14, 2020. The Lagos State Domestic & Sexual Violence Response Team, DSVRT, has said Afobaje Maiyegun has been arrested. 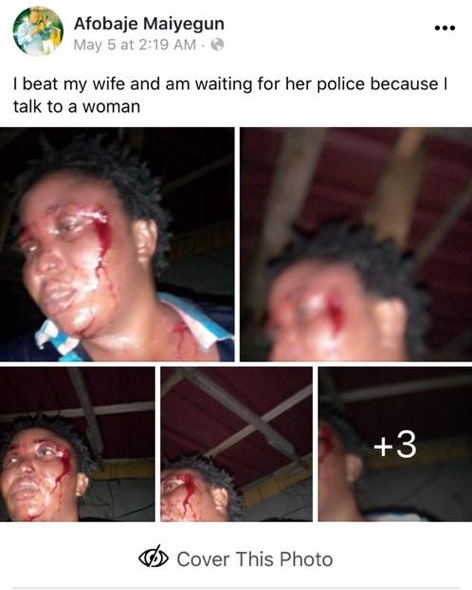 Preliminary investigation showed that this isn’t the first time Afobaje would carry out such a dastardly act.
The agency says Afobaje will be arraigned in court this Friday May 15.
“The attention of the Lagos State Domestic and Sexual Violence Response Team was drawn to a viral post on Facebook wherein one Afobaje Maiyegun boasted that he had just beaten up his wife and declared he is ‘’waiting for her police‘’ to come and arrest him.”
“Immediately, the team reached out to ACP Gbolahan Odugbemi, Area Commander, Area J who ensured that the said person was arrested immediately. Preliminary investigation conducted revealed that this is not the first time the said Mr. Maiyegun would perpetrate such a dastardly act”
“A partner NGO, @HerfessionsApp was on ground to assist with the investigation. The case is set to be charged to court on Friday, 15th May,2020. This is to sound a clear warning that the Governor of Lagos State, Mr. Babajide Sanwo-Olu has declared a zero tolerance to Sexual and Gender Based Violence in the State and as such perpetrators will face the full weight of the law.”

0
Previous post IG of Police orders immediate withdrawal of billionaire, E-Money’s police escorts
Next post Ghanaian sex worker allegedly pushed her customer to death from hotel window while he still had a condom on (Video)
Admin