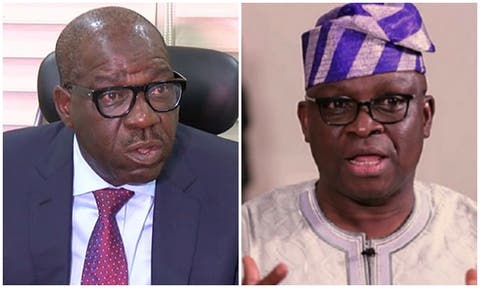 The governor, who was elected on the platform of the All progressives Congress in 2016, had dumped the party for the PDP following his disqualification from the APC primary election in June.

Obaseki has since been at loggerheads with his predecessor and former APC National Chairman, Adams Oshiomhole.

The election is less than five weeks away but the political climate in the state is turbo-charged with the players engaging in verbal attacks.

Obaseki, who is seeking reelection on the platform of the PDP this time around, will face, amongst other contenders, APC candidate, Osagie Ize-Iyamu, who has the backings of Oshiomhole; the President, Major-General Muhammadu Buhari (retd.); and APC stalwart, Bola Tinubu.

The state House of Assembly has also been embroiled in crisis of late with different political camps trying to outdo one another.

Commenting on Edo politics, Fayose, a member of the PDP, wrote on his verified Twitter handle on Thursday evening, “My position is that, for obvious reasons, I am not a fan of both Gov Obaseki and Oshiomhole. That notwithstanding, I believe that Obaseki will win, but he should honour his agreement with the PDP by not returning to APC after assuming office for the second term for flimsy excuses.”

That notwithstanding, I believe that Obaseki will win, but he should honour his agreement with the PDP by not returning to APC after assuming office for the second term for flimsy excuses.