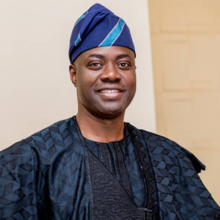 The All Progressives Congress Professionals in Oyo State has warned Governor Seyi Makinde against wasting the state resources on the People’s Democratic Party affairs over his alleged ambition to run for vice-presidency in 2023.

Arising from its meeting in Ibadan on Friday, the APC-P noted that rather than concentrate on governance, Makinde has endeared himself to mere political jamboree outside the state.

The APC group in the state alleged that going by information within its reach, over N7bn had already been squandered by the governor on activities within the PDP in the last six months.

The Chief Convener of the APC-P, Alhaji Adekunle Lawal, said, “Governor Makinde has completely abandoned governance in Oyo State for his quest to extend his political control to the entire South-West, South-South and some states in the North-Central.”

The group said it was appalling that the governor went as far as Niger State to seek political control using the state’s resources.

Efforts to get a reaction from Taiwo Adisa, the Chief Press Secretary to the governor, as of the time of filling this story was not successful as calls were not picked. Text and WhatsApp messages were also not responded to at the time.