Sunday Igboho vs Fulani herdsmen: Igboho has no right to issue eviction notice to herdsmen – Falana 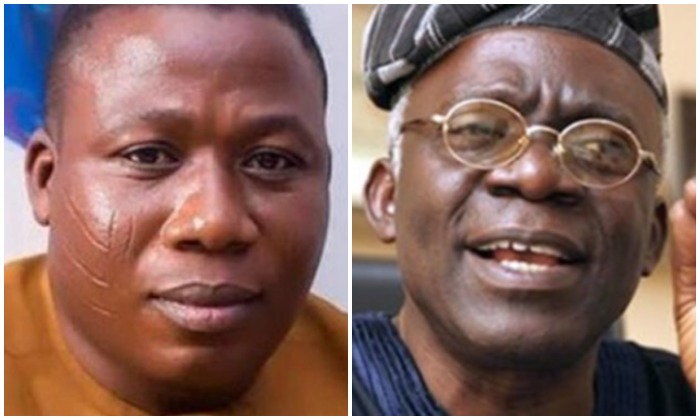 Human rights lawyer , Mr. Femi Falana ( SAN ) , has said popular Yoruba rights activist , Sunday Adeyemo , well known as Sunday Igboho, had no right to issue a vacation notice to Fulani herders in the Ibarapa Local Government Area of Oyo State .
Igboho , who is the Akoni Oodua of Yoruba land , had asked herdsmen accused of perpetrating crimes ranging from kidnappings , killings , rape to invasion of farmlands with their cattle to leave within seven days .
At the expiration of the ultimatum last week , he and his followers had stormed the Fulani settlement in Igangan to eject Seriki Fulani, Salihu Abdukadir , and the herders .

But Falana advised the affected herders to seek redress in court , saying , “ Anybody who is affected by such illegal quit notices would have to go to court to stop whoever is issuing the notices . That is the law but don’ t let us resort to violence ; it is unnecessary .”
The senior advocate , who spoke on a
BBC programme on Wednesday monitored by The PUNCH , argued that some of the evicted herders had lived in Ibarapaland for many years and have the constitutional rights to do so.
Falana said, “ With profound respect under our laws, even a squatter cannot be ejected and that is why on a daily basis , tenants are given quit notices by landlords or owners of properties.
[ ICYMI ] Service chiefs’ appointment : Buhari goes against judgment , bypasses National Assembly
“ So, a private citizen cannot wake up and say anybody should leave the community , you must embrace the rule of law . Nobody can do that , not even the government because section 43 of the constitution says every citizen shall have the right to own and acquire properties in any parts of the country .
“ The campaign of the human rights community is that if you are born in a place , or you have lived for not less than ten years in any part of the country , you should be considered an indigene and be entitled to all the rights and privileges of the so-called indigenes of the state . So, for me , there is no way I can embrace anyone who has given quit notice to any group of people . ”
Falana warned against generalisation , saying criminal elements must be arrested and prosecuted without an entire ethnic group being labelled as criminal .
“ We must stop the idea of criminal profiling . If anybody has committed an offence or a group of people has committed an offence , we must fish them out and have them tried under the law but you can ’ t wake up and say all Yoruba people , all Hausa people are criminals , all Igbo people are criminals . No , it is a fallacy of generalisation , ” he noted.
He said the failure of the government to prosecute those paraded by the police for state offences had resulted in a situation where private citizens issue quit notices to people of other tribes.

The rights advocate said, “ The government must ensure that the lives of the citizens are secured . It is the abdication of the duty of the government that has made the Sunday Igbohos to be relevant in the society .
“ That is why private citizens give quit notices to people from other parts of the country . It is not the right way to fight this problem .
“ We need to have ranches, in Oyo State in particular . The largest abattoir in West Africa is located in Oyo State but the state government has not allowed the abattoir to function for the past nine years. Is that how to run a country ?
“ The scientific way of solving this problem has been abandoned. So, why would a Sunday Igboho not take over the government of that state? That is what is going on.

“ There are genuine fears and facts on ground that the lives and properties in that state and in many states of the country are not safe.
“ Let the government remove the basis of this quit notice by ensuring that lives and property of every person in Nigeria in safe. ”