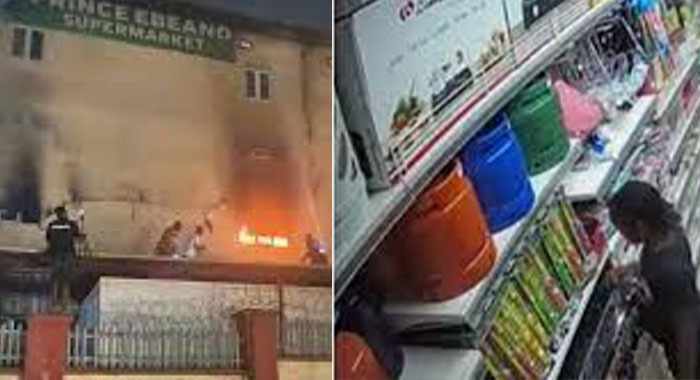 Nigerians have reacted to the closed-circuit television footage showing how a 9-year-old girl set fire to the multi-million naira shopping centre, Ebeano Supermarket in Lokogoma, Abuja on July 17.

The girl had accompanied her mother to the supermarket to shop during which she wandered on her own to the section where inflammable items were kept.

She could be seen in the footage touching one of the items placed on the same shelf as gas cylinders.

A few seconds after she walked away from the section, fire could be seen burning on the shelf holding the item she touched. The inferno led to the supermarket counting losses.

Reacting, popular singer, Timi Dakolo said, “There is actually more to that Ebeano supermarket burning. The said child went straight to the rack that has inflammable. She walked like knew where she was going. Watched it start burning before she left.”

@Ahmedlekan agreed with Timi Dakolo, saying, “Very true, that is not a child. No child will go straight and set fire if they had not been asked/forced to do it. The child played the part well and followed the script. It’s the main mastermind that we should be wary of.”

@Unkul_Obi spoke of Ebeano Supermarket, saying, “There is a store assistant in every line to help you get whatever you want. How come there was no assistant there? How come no one was watching the CCTV? Why was the child too careful to start the fire?”

@islimfit also wondered “why there was no one manning the CCTV Camera in the first place.”

@oraekene1 said, “Also, why does a place as big as Ebeano not have sprinklers? That’s the problem I have with my Igbo businessmen, their disdain for ‘onye beke things’ and modern tools and technologies, like the traders in Alaba moving billions in merchandise without insurance.”

@sandybabyonyii said, “I feel bad for the owner of Ebeano supermarket that got burnt. It’s malicious damage. I hope they have comprehensive insurance that will cover their losses. Importance of insurance can never be underestimated.”

According to @nicholasibekwe, “I will not join those calling that 9-year-old that started the Ebeano fire evil or wicked. The entire episode got me reminiscing about the mischief I did as a teenager just for laugh. Omo!”