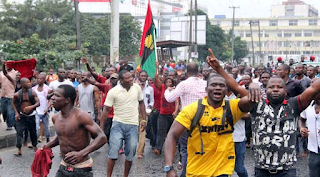 Following a sit-at-home order issued by the Indigenous Peoples of Biafra (IPOB) turned bloody on Monday, two persons have been reportedly killed.

It was gathered on Monday that a passenger was burnt alive in Nkwogu, Ahiazu Mbaise Local Government Area of Imo State.

Trading activities were grounded in most parts of the state as residents observed the IPOB order.

Schools were also closed while students sitting for NECO examination were prevented from taking their papers.

It was equally gathered that the deceased was inside one of the three buses that were torched by a mob.

According to reports, two of the vehicles, Hummer Buses, belonging to a popular transport company, Libra, were coming from Umuahia, Abia State capital, when they ran into a group of thugs suspected to be members of IPOB.

The attackers reportedly shot at the tyres, which forced the bus to stop.

The passenger could not escape before the bus was burnt down.

The Police Public Relations Officer, CSP Mike Abattam could not be reached as at the time of filling this report to seek more information on the incident.