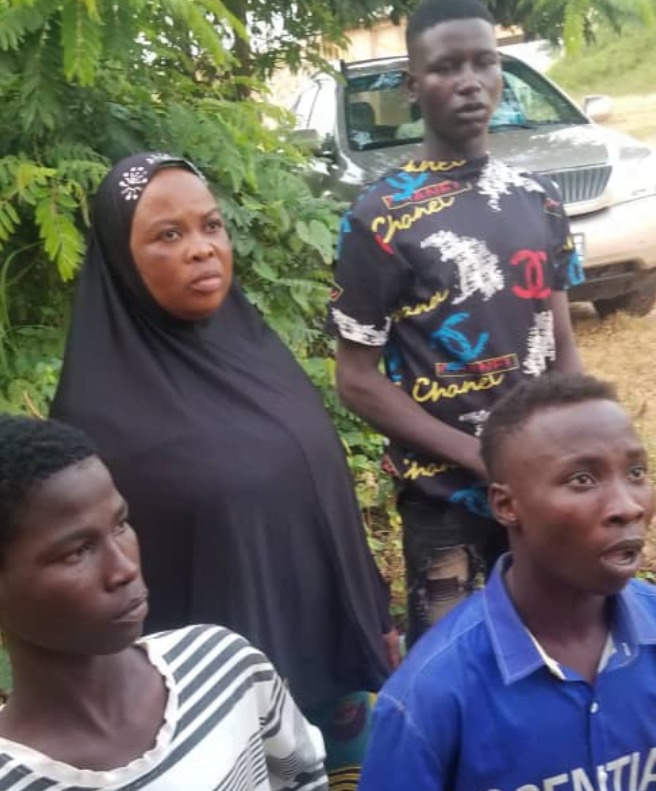 housewife, Memunat Salaudeen, was Monday arrested by operatives of Ogun State police command for planning with three others to kidnap her husband.

The suspects, according to a statement by the command’s Public Relations Officer, Abimbola Oyeyemi, were apprehended along Papa/Itori Road when men of the Federal Highway patrol team, led by Inspector Sunday Imohiosen, were on stop and search duty.

Oyeyemi said: “The team accosted three young men namely, Olayinka Lawal, Asungba Nura and Usman Oluwatoyin, whose looks were highly suspicious on a motorcycle and stopped them for search.

“While searching them, a cutlass and a new rope were recovered from them.

“The police team then questioned them individually about their mission in that area with a rope and cutlass, with the three of them giving different answers to the question.

“That further aroused the suspicion of the policemen, who then decided to interrogate them further.

“In the course of interrogation, the three of them confessed that it was one woman, who was later identified as Memunat Salaudeen, that gave them N8,000 to buy a cutlass and a rope strong enough to tie a human being.

“They confessed further that the woman, who is a nurse at Balogun Tuntun gas line, Ifo, asked them to hide somewhere along the road, and that she will lure her husband to the place where they will kidnap him and tie him with the rope and then ask for ransom.

“They further informed the police that the woman told them that was the only way she can get money from her husband, who she accused of being very stingy even though he has money.

“The woman was, subsequently, brought to the scene, and on seeing the arrested suspects, she admitted being the brain behind the whole thing.

“She told the policemen that her husband has not been giving her money and that she decided to plan his kidnap to get money from him at all cost.”

Meanwhile, the state Commissioner of Police, Lanre Bankole, has ordered the immediate transfer of the suspects to the anti-kidnapping unit of the State Criminal Investigation and Intelligence Department for discreet investigation