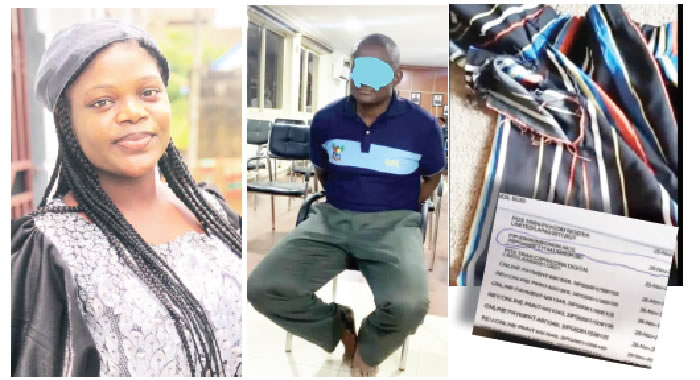 Many Nigerians have expressed anger after a grisly revelation that Nice (Andrew) Omininikoron, the driver of the Bus Rapid Transit vehicle arrested in connection with the brutal murder of a passenger, Oluwabamise Ayankole, had in the past allegedly raped another lady.

Nigerians registered their displeasure on various social media platforms and called for an urgent prosecution of the driver, in the interest of justice.

They also urged other female passengers to speak up on their encounters with the BRT drivers in Lagos State.

There have been calls for justice for Bamise, whose corpse was recovered at Ebute Ero, after she was last seen on the BRT bus driven by Omininikoron.

Narrating her ordeal to The PUNCH on Thursday, the lady accused the 47-year-old of raping her on the BRT bus.

The female victim accused Omininikoron of raping her on November 25, 2021, sharing a similar narrative with Bamise’s saga.

The former salesgirl at a shop in Ajah said after she closed from work around 8 pm, she boarded the BRT bus driven by the suspect.

The driver was to convey her from the Alesh Bus Stop in Ajah, to Jakande, along the Lekki-Epe Expressway, when things took another dimension.

The victim said she could not call for help because Omininikoron parked the bus at a desolate location, adding that he refused to let her go after allegedly raping her.

She also claimed that Nice threatened to stab her.

A statement of account provided by the victim confirmed Omininikoron sent N3,000 to her on November 25, 2021.

A video clip of her torn clothes was also seen by our correspondent.

Anabel Phill: Thank you for sharing your bitter experience with the BRT driver Omininikoron. You have given voice to his last victim who unfortunately did not survive his attack and many other victims out there who can’t speak out. I pray justice is served.

Abiodun Komolafe: This man should be made a scapegoat to serve as deterrence to others. I’m very sure he is not the only one. People are just too wicked. Imagine the BRT is not safe again.

Adeleke Adentan: The driver’s cup is just full. This was not the first time he and his gang had been doing this and finally, they presumably are working for some big people. Just check out his confidence, someone that is supposed to have been beaten to stupor. I am very angry in my soul whenever I hear this driver talking. He knows the other men, no doubt.

Desire Onyido: It is obvious he has been doing this for a long time. People will just go missing and family will cry and suffer in silence. If Bamise hadn’t left any clue, she would have been declared missing and just like that…!

Maarufat Busari: Another lady also had a closer experience with him at the Oshodi BRT bus stop, she only didn’t become a victim because she was waiting for her husband to pick her up, and didn’t board his bus, as he was luring her to, because it was late at night.

Itunu Adedokun: Your sins have found you out, every day for the thief, one day for the owner. You can’t escape judgement, I hope your punishment serves as a deterrence to others.

Ajibola Williams: I really can’t blame you for not coming out on time, the shame and the injustice in our society are beyond measure. May God grant you comfort, I wish you had that courage all this while to expose this evil man, maybe the victim wouldn’t have died of the same tragedy.

Nina Elumelu: His time is up in the spirit and in the physical; even if he is bailed or freed, he remains a haunted man till his last days. As for the benefactors and paymasters of this driver’s bountiful crimes, it is a loss all the way for you people.

Your evil ambitions shall be cut super-short. Are there no women and very old elders in Bamise’s community? You people don’t know what to do to stir heaven and earth for justice and vengeance? How long before we can all say is enough?

Johnson Tunde: So he has been doing this for a longer time, it was Bamise’s spirit that caught up with him. He should be taken to a psychiatrist to check on him to know the punishment he deserves.

Vincent Solomon: He is not alone in this, investigations should be made to find out those friends close to him. They are all in the same business. May God deliver the righteous from vicious men and expose all their evil devices.

Elizabeth Jonah: Every day for the thief but one day for the owner. You continued to enjoy sins covered up with a terrible lie; ruined lives, but the prayers of the faithful will not go unheard, so sad.

MrBenCool @MrBenCool: This is the same driver the Lagos State Government has been doing everything possible to protect.

Reacting to the fresh allegations, the Lagos State Police Command tweeted, “Anyone who has a complaint against the suspect is advised to report at the State Criminal Investigation Department (SCID), Panti, for necessary Action,, please”.