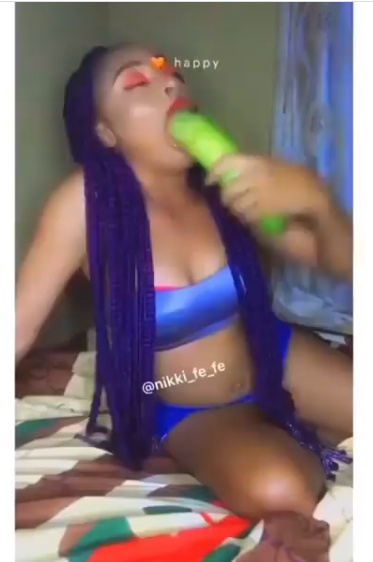 A Nigerian lady identified as Nicki has revealed the unhealthy things she does with the cucumbers her mother sells.

According to the lady she uses the fruits to sexually satisfy herself before washing and returning to her mothers shop for sale.

Nicki who shared a video of a woman supposedly her mother, sorting out the cucumbers she bought, revealed that she usually picks her pssy size, use it on her pssy, before washing and returning it.

In a viral video shared on social media, the lady further revealed that her mother goes on to sell the cucumbers she (Nicki) has used for her sexual pleasure to unsuspecting customers.

Watch the video below,

In other news, a viral video making rounds on social media captured the moment an insecticide cover was pulled out of the vagina of an unidentified Nigerian lady.

The video shows the moment the object was forced out of the lady’s vagina by a medical doctor, while she was screaming in pain.

Nigerian lady dies after her boyfriend pushed her from a five-storey building in Onitsha (Photos)
Nigerian man, Prince Obieze Nestor reportedly dies in Dubai police custody after being arrested for flaunting Dollars on Instagram